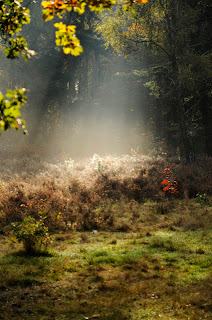 It's difficult to let go of our agendas. Well, for me it is. Somehow it seems easier when it came to development, language, movement - we knew it would come, we didn't wait. We didn't anticipate. We didn't want specific things at specific times. But when it comes to... fun?

It's autumn here, and although for Maureen and Katherine it's closer to strawberry season, up here leaves are putting on their finest colors and organizing a show. We were walking in the forest, just the two of us. Leaves were dancing, and it was as beautiful as it can be in autumn. I had been there the day before and wanted to show Antek a hut I had found - someone put together a bunch of large sticks and branches and made a really lovely place for kids to play in. He would love it. I knew he would, and I wanted to get there quickly. I wanted him to have fun. I was anxious to see a happy smile on his face when he saw the hut, when he realized he could climb into it, and that the floor is made of leaves and sticks.

Suddenly I remembered that morning, Antek came running to me from the garden with a cup he had found somewhere in the sand. He was holding it up, I was busy doing something else. I looked at him and said: 'Oh, are you having tea?'. He looked at me with the same expression he just had a few minutes ago. Not knowing what I was talking about. Not sure what I meant. Sure, I wanted to join in the fun, but did I have to jump the line? Whose game is it, anyway? Had I waited a couple more seconds, I might have found out what the cup was, or maybe that there was something about it, or that it was a part of some building, or a ship...

Paweł came home the other day from the playground laughing about some woman who was urging her son to stop playing with whatever he was playing now, because 'it was time to go and have fun on the slides, come on you like the slides.' How easy is it to assume we know better what the other person wants? And why? It seems especially ironic, when it comes to having 'fun', don't you think?

Everything has its beauty but not everyone sees it. (Confucius)

The leaves were beautiful, their edges were sharp as if someone had traced them with a thick brush. They were piled one on top of the other, with sticks coming out of the pile, as if someone had a plan, some lines and some curves. It could have been a detail from one of Escher's paintings. But then I saw something moving underneath, a flurry of little legs trying to get somewhere, in a hurry but also in a lot of effort - beetles were trying to push something aside to make room for... I could not see what. There were three of them, I had never seen ones like these before - they were dark blue and green, moving really fast, their colors shiny in between the leaves. I could not stop staring at them. Antek looked up at me and smiled. Did he know?

After a little while we got up and slowly walked playing with the leaves. We got to the hut and had fun in it. Unhurried, unforced fun. Fun when we were ready for it. The way we wanted, and at the time we both wanted. Would he have enjoyed it as much if I had hurried him over there? I don't know. All I know is that it is all to easy to forget who we're doing something for, or why we're doing it in the first place.

It's difficult to let go of our agendas. But if we do, we might just catch a glimpse of that beetle.